Application season is almost upon us, and many anxiety-ridden applicants will be considering whether or not to apply via binding Early Decision application to their dream schools.  There is conventional wisdom out there that says that applying via binding Early Decision signals to a school that you are very committed to attending that school, and therefore boosts your chances of acceptance, which makes this option very attractive for those applicants who are dead set on attending a certain school, or would very much like to attend a school but are unsure that their numbers are high enough to get in.  Another piece of conventional wisdom says that, by being accepted as an ED applicant, a school essentially has you cornered and therefore has little reason to offer you financial incentives (i.e. scholarship funds) to entice you to attend.  Because the data I have on scholarship awards is very sketchy in its current state, I can't really address this second point, but it is certainly worth noting and makes all kinds of common sense.

The first point, though, I think can be examined by using the same regression analysis I have used thus far.  I will focus only on my second model, in which I only consider applicants who were either accepted or rejected by schools (in other words, waitlisted candidates whose fates are unknown are left out of the analysis).  I will deal only with the Top 14 schools in this post, because most of them offer a binding ED application option, and because outside the T14, there isn't a whole lot of binding ED to be found.

With all that said, let's take a look at the numbers.  In the first chart, I'm positing the results considering the ENTIRE pool of applicants who were either accepted or rejected at these schools. As always, these are the results after controlling for LSAT score, undergraduate GPA, URM status, timing of the application, nontraditional status, and gender.  Our variable of interest here is simply the increases in the likelihood of acceptance for an applicant who applies ED as opposed to RD. 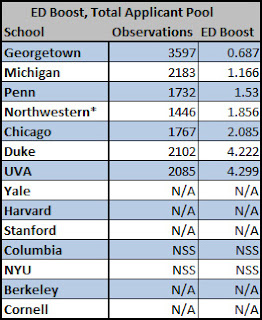 Notes here:
- The first number is the number of observations the regression is based on, and the second is how many times more likely ED candidates are than identical RD candidates to be accepted (in other words, Michigan ED candidates are 1.166 times more likely to be admitted than identical RD candidates, and Duke ED candidates are 4.222 times more likely to be admitted than identical RD candidates).
- Georgetown actually seems to disadvantage ED applicants, as they are 31% less likely to be admitted than identical RD applicants.  I have no idea why this might be.  We see this same results at George Washington, but because all ED accepted applicants to GW are given substantial scholarships, the result there makes perfect sense.  For Georgetown, not so much.  I'm definitely interested in what hypotheses you all might have about this.
- I have an asterisk beside Northwestern because of Northwestern's recently instituted policy of giving full rides to accepted ED applicants.  These regression are based on data going all the way back to the 2003/2004 cycle.  One would expect Northwestern's number to be similar to GW's (which isn't listed here), but actually in the first year that Northwestern implemented the program, their ED boost was enormous.
- N/A is for schools that don't offer binding ED, and NSS means "not statistically significant" and indicates that a school had no boost associated with ED applications in my analysis.
- The University of Virginia has the biggest ED boost, which is no surprise, and confirms the conventional wisdom that is "ED UVA!"

Next, we'll look at the ED boost associated with non-splitter applicants (applicants who I don't classify as splitters nor reverse-splitters): 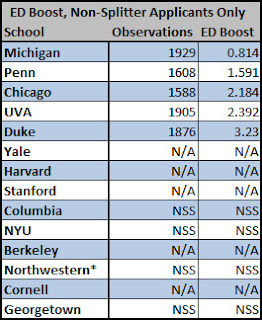 Notes here:
- This time around, it seems like Michigan disadvantages non-splitter EDing applicants.  Thoughts?
- Northwestern drops off the list.

Next up, the splitters: 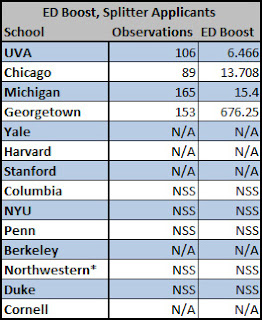 Notes:
- The boosts are generally much bigger for splitters, where they actually exist.
- Duke drops off the list here.
- Oh my god, Georgetown. 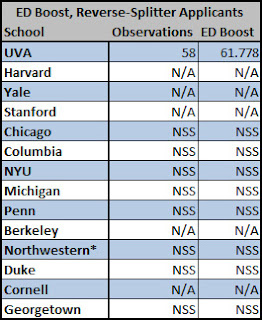 Only one story here, but it's a big one: UVA gives a massive boost to reverse-splitters who ED.  The sample size is reasonably small at 58, but given the relatively small number of variables we are controlling for, the results are valid.

So, there you have it - the boosts associated with ED at the Top 14 across applicant categories.  In a (near) future post, I will rank schools by the boosts they give for earlier applications, which seems to be, in general, a bigger deal.