By request, a chart!

A reader asked that I post at least one chart for a school demonstrating an advantage to earlier applications.  This is actually a little trickier than it might seem.  At the person's suggestion, I decided to give this a try with the U of Chicago, since it appears to give the biggest boost in the Top 14 to earlier applicants.

The reader seemed to suggest that I plot the % of applicants who were accepted by month that the application was submitted (at least that was how I understood the request).  This is a little problematic, though, because the applicant pools for each month are likely not equal.  Some people have theorized that applicants with stronger numbers don't have stronger numbers randomly, and might be the types of people who also are going to get their applications submitted earlier, and in this case we'd just expect earlier applicants to have more success because they are better overall applicants regardless of when they submitted their applications, and so higher acceptance rates for earlier applicants wouldn't tell us much.

To be honest, this isn't a super easy problem to work around, but I gave it a shot.  What I have done is taken the LSAT:GPA ratio suggested for Chicago by Law School Predictor, which is 3.04 to 1 (I'd much rather use an actual published index to do this, but Chicago does not provide one), and developed an "index" score for each applicant based on that formula...in other words, it's just a figure that indicates the numbers-strength of the applicant.  I then determined the average index number for all applicants, and calculated the percentage of applicants above the average who were accepted, by month of application submission.  This way, we at least partially control for difference in the strength of the applicant pools for each month, and instead of looking at just the percentages of applicants who were accepted, we're looking at the percentages of "strong" candidates who were accepted.

So, that pretty much does it for explanation.  Below is the chart: 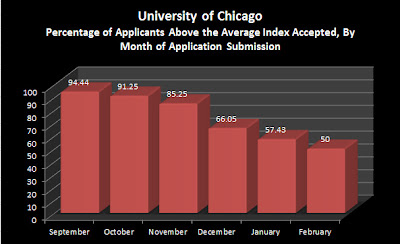 As you can see, there is a definite downward trend in the percentage of "strong" applicants who were accepted as you go deeper into the cycle, and the drop off from November to December is especially steep.  In terms of the number of applicants, there is an upward trend from September to November (in which applications peak), and then a steady decline, with a very sharp drop in February.

Although the graphic above does not account for how far accepted applicants were from the mean, I think it definitely visually demonstrates an advantage to applying earlier (although it doesn't control for anything other than LSAT or GPA, the regression analysis on which I based my original "early application" boost post does).

So, there you have it, in pictures.  Well, a picture.  If anyone is interested in seeing how other schools look, let me know.