A recent thread on TLS reminded me of something I have been planning to do all along and, honestly, should have just done from the start, and that is do separate analysis for data before and after applications started dropping of precipitously for the 2010-2011 cycle.  The short story is that Anne Levine, the chief consultant at Law School Expert, a law school admissions consulting firm, at some point in the past said that applying early on in the cycle was important, but has recently said that it is not.  Ms. Levine's own blog post on whether or not she "contradicts" herself is here.

The first thing I want to point out is that my analysis supports, just as Ms. Levine states in her first point of her blog post, that applying early ASSUMING your numbers wouldn't be any better if you applied later is the correct answer.  If, however, you suspect you could raise your LSAT by even a point or two by retaking in December, you absolutely should retake and apply later, as the advantage associated with even a couple extra LSAT points almost always outweighs whatever advantage would be gained by applying earlier.  I actually stated this in my own previous blog post about the advantage to applying earlier.

She goes on to further state that


The importance of applying early was definitely diminished in the Fall 2013 cycle, as evidenced by the fact that I had someone with a 3.4 and 163 who applied to a Top 20 law school in June and got in off the waiting list. That never would’ve happened in 2010!

This, of course, is not much proof at all that the importance of applying early was definitely diminished in the Fall 2013 cycle, as it is a single anecdote.  So, of course, I wanted to look into it a little further myself.

From the moment the idea of starting this blog occurred to me, I have been planning on comparing how things looked prior to applications started falling off with how things look since they have started to fall off.  Why I didn't just do this from the outset, I'm not sure.  My major goal with this site is to have it be a useful resource to people currently in the process - or thinking about - applying to law school.  Obviously, if things did change with the decrease in applicants, the more recent data is going to be a lot more relevant.  The recent thread on TLS and Anne Levine's response kind of shook me awake on this one, I guess.

So...first things first.  Below, I am posting the "boosts" associated with each earlier month an application is submitted, just like in my last post, except this time I am posting it for the T14 for the 2003/4 cycles through the 2009/10 cycles on the left, and from the 2010/11 cycle to the 2012/13 cycle on the right, so we can compare.  And what do we find?  That Anne Levine is largely right, at least as concerns the T14: 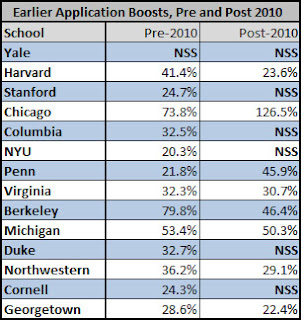 In all schools except Chicago and Penn, the percent-increase in an applications likelihood of admission for each earlier month applied decreases, and in most cases significantly, in the post-2010 period as compared to the pre-2010 period.  In the cases of Stanford, Columbia, NYU, Duke, and Cornell, it disappears entirely (and, of course, it was never there for Yale anyway).  This lines up quite nicely with what Ms. Levine claims.  The real surprises then, are Penn and Chicago, where the boosts have not only increased, but have increased substantially since applications started falling.  Thoughts?

Over the next few days (when I'm not working at the job that actually pays me), I'm going to break this down further and see how the "boost" has evolved over time, cycle-by-cycle for the T14.  Until then!
Posted by Unknown at 11:40 AM