Applying Earlier at the T14: Does it Matter, and How Much?

Yesterday I posted regarding the binding Early Decision applications to the Top 14 law schools, to see if there seems to be any truth to the notion that applying ED to a school can give an applicant a boost in his or her chances of acceptance.  Today, we'll look at the effect (if any) that applying earlier in the cycle has on those chances.

First, a little explanation.  In organizing the data, I broke applications down by the month in which they were submitted.  The results you will find in the tables below correspond to the increase in one's chances of acceptance correspond to each earlier month the application is submitted, which is different from each month earlier.  In other words, there is an X% increase in your chances of acceptance if you apply in September rather than October, or October rather than November, etc.  This creates a little bit of a problem, because technically, a September 30th application is coded as a September app, and an October 1st application is coded as an October app.  It would probably be foolish to think that any of the % increases you see in the charts would apply to an application sent out one day earlier, as the case would be in the aforementioned example.  Still, the charts are instructive for giving a general idea of how schools treat earlier applications.  I will break the data down into four charts: the entire applicant pool, the non-splitters, the splitters, and the reverse-splitters.  The percentages in each chart correspond to the increased likelihood of admission for an applicant submitting in one earlier month. 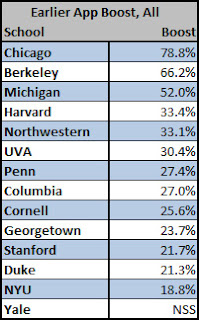 As you can see, every school except Yale demonstrates at least some boost for applicants submitting earlier.  So, when Yale tells you it really doesn't matter if you apply in September or February, it appears that they mean it.  Even the lowest school on the list, NYU, provides almost a 20% increase in an applicants chances of admissions for submitting in September as opposed to October, October as opposed to November, etc. 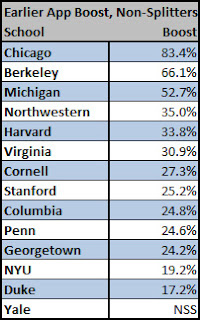 Not a whole lot different from the first chart, with the exception that for some reason I have decided to call UVA "Virginia" in this chart.  I was simply too lazy to go back and fix it. 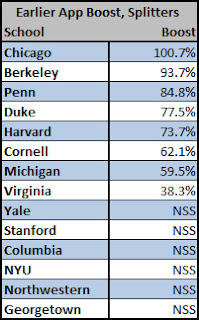 Here things get a little interesting.  Almost all the boosts increase (at least where they still exist), and the Penn, Duke, and Harvard boosts increase substantially.  Other schools, however, completely drop off the list, indicating no statistically significant advantage to splitters applying earlier at these schools. 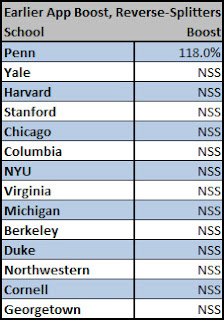 And, as usual, reverse-splitters kind of get shafted.  With the exception of Penn, which gives an enormous boost to splitters applying earlier than their later-applying counterparts, there isn't a single reverse-splitter earlier application boost to be found.  NYU came very close to statistical significance on this one, but didn't quite make it, and rules is rules.

So, there you have it.  If you ever needed some hard evidence to tell you to get it in gear and get that application out, there it is.  This comes with some obvious caveats, though!  For one thing, don't send in a subpar application, thinking that it's more important to get it in early.  Because I can't measure things like letters of recommendation, resumes, or essays, I definitely don't recommend sending in rushed or poorly thought out examples of any of these simply in order to turn the application in earlier.  So, let me rephrase what I said before: get it in gear and get that super-polished application out.

Also, one of the most common questions I hear comes from applicants who are trying to decide whether to apply as early as possible, or re-take the LSAT.  Although there a boost to applying earlier for most students at most schools (and sometimes substantially so), any "lost" early application boost is more than compensated for by an LSAT point or two, so as long as you think you can increase by a few points, retaking is often the right answer to this question.
Posted by Unknown at 12:55 PM